Below are the events for the next 5 weeks. For a full Calendar please click here.

The night of November 30th 2011 was a celebration for young people in Galway Diocese. Twenty students were awarded Certificates and Medals for their achievements in their respective Parishes, created to commemorate the late John Paul II.

The ceremony took place in the N.U.I.G. Chapel and was attended by Bishop Martin Drennan. Father Diarmuid Hogan, Chaplin of N.U.I.G., welcomed everybody and the awards were presented by Gerard Brennan, Dublin All Ireland Winning Team Footballer.

Among the students who received Certificates and Medals were five students fromSeamountCollege, Kinvara. Their achievements consisted of:

Three of these students had the opportunity of visitingGhanalast summer, accompanied by their Principal, Bean Mhic Dhomhnaill and teacher Ms. Eileen Fitzgerald. The girls were delighted to have taken part in Pope John Paul II Awards. They enjoyed the challenge of being involved in their school, community and Ghana Projects. They now feel that young people are the future of the Church, as one girl quoted: ’Unless we all do our bit, we could very easily lose interest in it altogether’.

Pictured is Lisa Casserly, 3rd year student. She played her debut match with the Under-16 Irish International Women’s Team on December 10th; the team beat Northern Ireland 4 to 1. Previously Lisa was on the Under-15 Irish International Schools Team. Students and staff at Seamount are all very proud of Lisa’s achievements and wish her continued success.

5th Year students from Seamount College recently took part in the first round of the National Public Speaking Project organised by Mental Health Ireland. Seamount College was represented by: Áine Earley who spoke on the topic “Awareness, understanding and acceptance – the keys to lifelong mental health; Ellen Britton whose topic was “The Celtic Tiger obsession with excess is dead – Time to regain our values”; and Laura McArdle whose speech was entitled “Mental health is precious – It colours us from within like stained glass but is as fragile as crystal”. Isobel Forde is the Team Substitute.

Apart from giving senior cycle students the opportunity to participate in public speaking, the project also aims to promote awareness and understanding among young people of the importance of positive mental health and of the causes and effects of mental illness. It also aims to reduce negative attitudes and prejudice associated with mental illness. 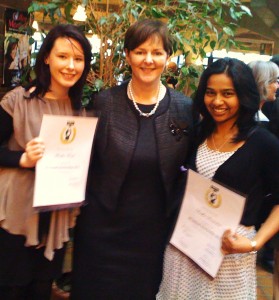 At a ceremony in University of Limerick, Radha Senaratne and Martha Forde received a 3rd level education award in recognition of their Leaving Certificate results. This award is sponsored by JP and Noreen Mc Manus and was awarded on the day by An Taoiseach Enda Kenny.  Radha hopes to begin studying Medicine in NUIG next year; she is enjoying a gap year at present. Martha is also taking a year off and will take up a degree course in Law and Business next year.

Seamount College has a junior team participating in the first round of the Gael Linn debates taking place at Killaloe Community School  on November 30th at 5pm.

Also on November 30th, five Seamount Students will be awarded a bronze medal for community involvement at the John Paul II Awards, taking place in the NUIG chapel, hosted by Bishop Drennan. This is the first time for this award to take place in the Galway Diocese.

Read about our visit to Ghana here
Read our Ghana blog here: